Couldnt really find a section for this..

antus wrote:So they're sets of 4 lots of 4 16 bit values (aka words. 16 bits = 2 bytes). So ignore the first 4 words and where you see AC53, thats 53AC in the tool. This is due to different computer systems ordering. Known as LSB or MSB (least significant bit, most significant bit). I think Festys tool has swapped some of the stuff around for you, but you can see 3 copies of 4 words that match the tool. So put the new value in, hit calculate and update all 3 copies on the rom, manually swapping the bytes in the words around. hit save. Flash to chip. Solder to board. I think the 3 copies are part of basic error detection and recovery logic. If one copy is found by the dash to not match the other two, the dash will update the mismatching copy to match the other two. This way a single bit corruption is recovered and the data is not lost. In theory if you updated 2 copies the dash would do the last one for you in the car... The first section is likely trip computer or similar, but I dont know.

Woohoo something I can assist with. Essentially the above is correct it also depends on your writer as to what why you enter this. Generally if the read displays as yours it will write in that format. You will need to swap each pair of bits. So in your example you have the stream

So to update. Type the new klms into the dashtool. this will through out the numbers you require. For example - 864321 klms would be.....

The three copies are a crude form of correction and checks. It does two types, first it will do the 2 byte check to see that the message is correct then it will move to see whether the data is the same between all three. From memory it goes and looks for the first one if this is correct looks at the second if this is correct then looks at the third. If one or two of these are not correct it will use the others. If there is two correct but different ones it uses the higher klms and copies across. To be safe just write the correct bites into the chips locations.

The first 16 bits describe the version and options for the dash, things like klms or miles, 60litre tank or 80 litre tank, and the speedo correction. the speedo correction can be adjusted via the menu options and the fuel tank size is changed via the switch on the back of the dash. so changing these will technically get changed back due to other outside sources.

For reference I have attached my VQ statesmans string read from the dash which got burnt. I plan to just drop this back into a new cluster to get my dash working again. My system does not swap the bits so it will look different to yours. Klms on mine are 180327.

So just do your update and then put back in. If you get 555555 klms then you have done something wrong. I would test on your original dash first to get the hang of it

I then went searching for your original thread and found that this might happen to be the old dash as the photo you had was for 304623 klms. So the main thing here is if you are doing this on the new dash make sure it is swapped and then generate the file appropriately, do nto change teh first 16 bits and all should work out a treat. Compare with the tool before doing a thing. if you need help yell

Biggvl wrote:oh, to confrim, that chip is from the 104 location...

I do apologise for this, im not really code reading or programming compliant, is there anyone in brisbane/ipswich area that could change the odo on my dash? Ive just done an engine conversion, and installed a level 3 digital dash ( just commodores dot com gave me the diagram to splice in the wiring harness for the lvl 3 cluster ). My ute has 207000km on the level 2 dash, and the digital has 311000km ad i'd like to keep the original km. Ive owned the ute since 2004 and have no plans to get rid of it. Can provide proof of ownership km etc.. not doing this to wind clock back for resale, this is my work hack for towing around a few POS gemini's

If you can't get help with this locally, I can do it if you send me your cluster.
Top

festy wrote:If you can't get help with this locally, I can do it if you send me your cluster.

I chatted to the auto sparky at one of the depo's i service and he said he'd give it a crack on a spare dash i have if i buy the thingy off ebay, but if i sent just the chip down would that make it easier for you? I can get another dash from a friend, we plugged it in today and its not showing the middle 2 digits of the odo, but im guessing thats not the chip, but moreso the display.

But yeah, if just the chip is ok, i can put it with a self addressed return envelop for you, plus a few $$ for doing it, whatever you want.
Top

I wasn't planning on pulling the chip out of the cluster to do it - the tool I made just plugs into the cluster's programming port.
here's a quick demo https://youtu.be/amYQ7H3FrKo

I think I've still got a couple of spare CAT2444 chips here somewhere. I'll have a look for them tomorrow.
What's the 'ebay thingy' you mentioned?
Top

So the log that carries the 3 windows is all you'd need?

And i stumbled across the vid even before i found this site, but only just put 2 and 2 together that it was you.

And the ebay thingy is this, the eeprom programmer. used the photos to try identify it. Even if it isnt the right one, it was sub $10 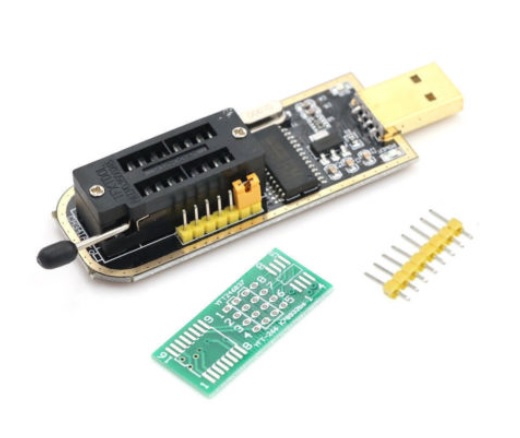 I can't tell you if that programmer would do the job or not, I recall that the programmers that others were using didn't support this chip's pinout so needed to use the ICSP port and a bunch of jumper wires or something. It was a long time ago...

I managed to find my spare chips, programmer and software, dug out my test cluster... then discovered that my tool doesn't work on win7 properly

I've re-written it in a slightly more modern framework this morning and programmed my cluster a few times to confirm it works, so looks like I'm up and running again.

So if you want to send me your 3 window "log" I'll PM you my address.
Top

festy wrote:
So if you want to send me your 3 window "log" I'll PM you my address.

I shall send away now
Top

Bit of an update on off the shelf programmer options - at some point in the last few years, support for these chips was added to the TL866 programmer.
It's there in MiniPro v6.60 / firmware 3.2.80 which I think are pretty old versions anyway, and I can confirm it reads and writes these perfectly.
(This is the original TL866, not the TL866II plus - but I guess it probably supports them too?)

Also I don't know if this has been mentioned in the thread somewhere already, but if you swap the high and low bytes of word 3 (i.e. DF20 -> 20DF) the displays switch to imperial (MPH, MPG etc).

Users browsing this forum: No registered users and 4 guests