Thought I'd start this instead of contaminating other threads with my shit.

I'll start it off with my latest acquisition, 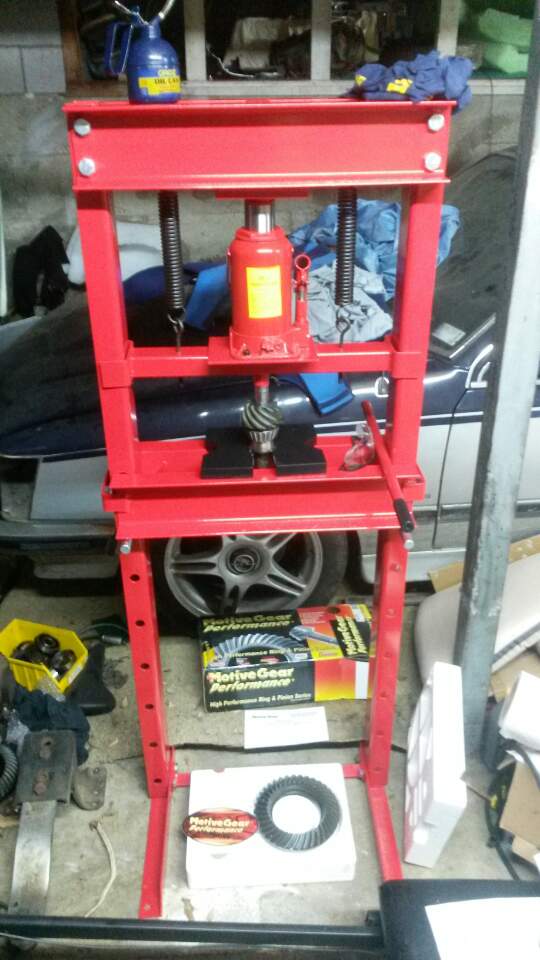 Plan is to make up some spacers and drifts to make doing our BW diffs nice and easy as I'll probably end up doing a couple for mates once mine is done.
Top

What I was supposed to be doing to today was to finish fitting the last of the decking planks. I'd left the last one off (next to the house) for painting purposes. Seeing as I have finished painting that section it was time to complete the deck. I needed to cut down the planks length ways and I really needed a couple of sawhorses and seeing as there was a few bits left over from the deck I threw this together this arvo,

Almost got the 2nd one finished before I called it a day.

Last week I finished making the gate and putting up the side of the deck. Looks something like this,

The gate is the first panel from the left. The idea is that it's a gate that doesn't really look like a gate

I built the deck last summer,

This is fairly much why I haven't got much done with the cars in the last year, the missus wants the house done.
We had new double glazed alloy windows fitted in the dining room/lounge as well as all the bedrooms. In the new year I'll get the last few done (kitchen, laundry, bathroom and toilet). and continue painting the rest of the house and the rest of a very long list of other stuff that needs doing.

i know what you did last summer. boom.

nice work there man. thats a claytons gate - the gate you have when you don't actually have a gate. nice work.
its hard yards doing that friggin decking i did that with my father outlaw some years ago man its some work.

Nice Decking build. Just got me the same press recently too.
Top

I was wondering how long that would take. She was my first V8 (and 2nd car). She's fitted with a Brock spec 308 (.020" over, flat tops/zero deck, B cast head with Brock spec cam and Performer intake), traumatic and 3.08 with custom 4 spider LSD large Salisbury. Engine is Throttle Body injected run by an early style Link ecu. Running on some 17" TSW wheel with SL springs and Bilstein shocks and various Nolathane bushes.

When my eldest was born we had a lot of trouble getting him to sleep but strap him into his car seat, start the car and he'd be asleep before we got to the end of the street

My boy always knew when I was coming home as he'd always be waiting at the door for me when I pulled in, missus said he could hear me 2 streets away

When I was made redundant may years ago I couldn't afford to drive her anymore so I parked her up, I'd had issues with the tuning side so I ended up cutting the wiring loom and pulling it all out. What I discovered is that when I paid to have an electronic dizzy fitted that was controlled by the Link ecu (it was originally just an HEI dizzy with the Link doing fuel only) the (supposedly) reputable tuning shop (Delco knows who I'm talking about) wired the power supply for the dizzy from the +12volt terminal on the coil instead of taking a clean +12volts from the Link ecu. I'd had issues with the timing varying wildly about 6°+ at idle. I even fitted a new timing chain but it was no better. Ever since I decided it was better to learn to do shit yourself then spend hard earned $$$ paying someone else to do a half assed job

Unfortunately she has the dreaded cancer issue under the rear window. The plan is to rebuild her as a cruiser one day, fix the cancer, rebuild the motor, decent converter with the trans (stock converter really sucks with the current engine) or possibly a manual conversion.
Top

OZ38 wrote:Nice Decking build. Just got me the same press recently too.

Cheers. Yeah it's not a bad press for the coin but I wouldn't use it in a industrial setting, wouldn't last to long I think but for me it'll do.

i know what you did last summer. boom.

nice work there man. thats a claytons gate - the gate you have when you don't actually have a gate. nice work.
its hard yards doing that friggin decking i did that with my father outlaw some years ago man its some work.

and yes we need a members rides - Immos VH SLE.

Hard work alright. Before I built this I had exactly zero building experience....

but I'm reasonably happy with the result. Next on the list after the outside is done is to re-do the bathroom.

Unfortunately the SLE won't be getting a build thread for a very long time, got so many other things to get sorted first I just don't have the funds to even think about it

immortality wrote:I decided it was better to learn to do shit yourself then spend hard earned $$$ paying someone else to do a half assed job

Wiser words have never been spoken.

yeah very true aye Chuff. rather take my units to people who know their shit ; or ; DIY. sometimes there is just shit i can't do. thats when folks like the Big G come to the rescue.
Cheers,
Greg aka Sir Burnie Tanington