I'm working with a 2003 Cavalier PCM with Serv no 12576162 and calibration number 12571650. Hoping to get to the point to read/write to the flash chip and attempt to reverse engineer the code to atleast disable security. It appears these are commonly used around 2003-2005.

Appears the flash is DE28F800F3B125 which if I remember right from the data sheet is 8mbit.

Figured I'd keep atleast a log here of progress. I'd like to get it possible to flash over the OBD2 interface, but I'll take what I can get as I figure things out. Been getting some great help on FB already and have atleast a loose plan in mind. 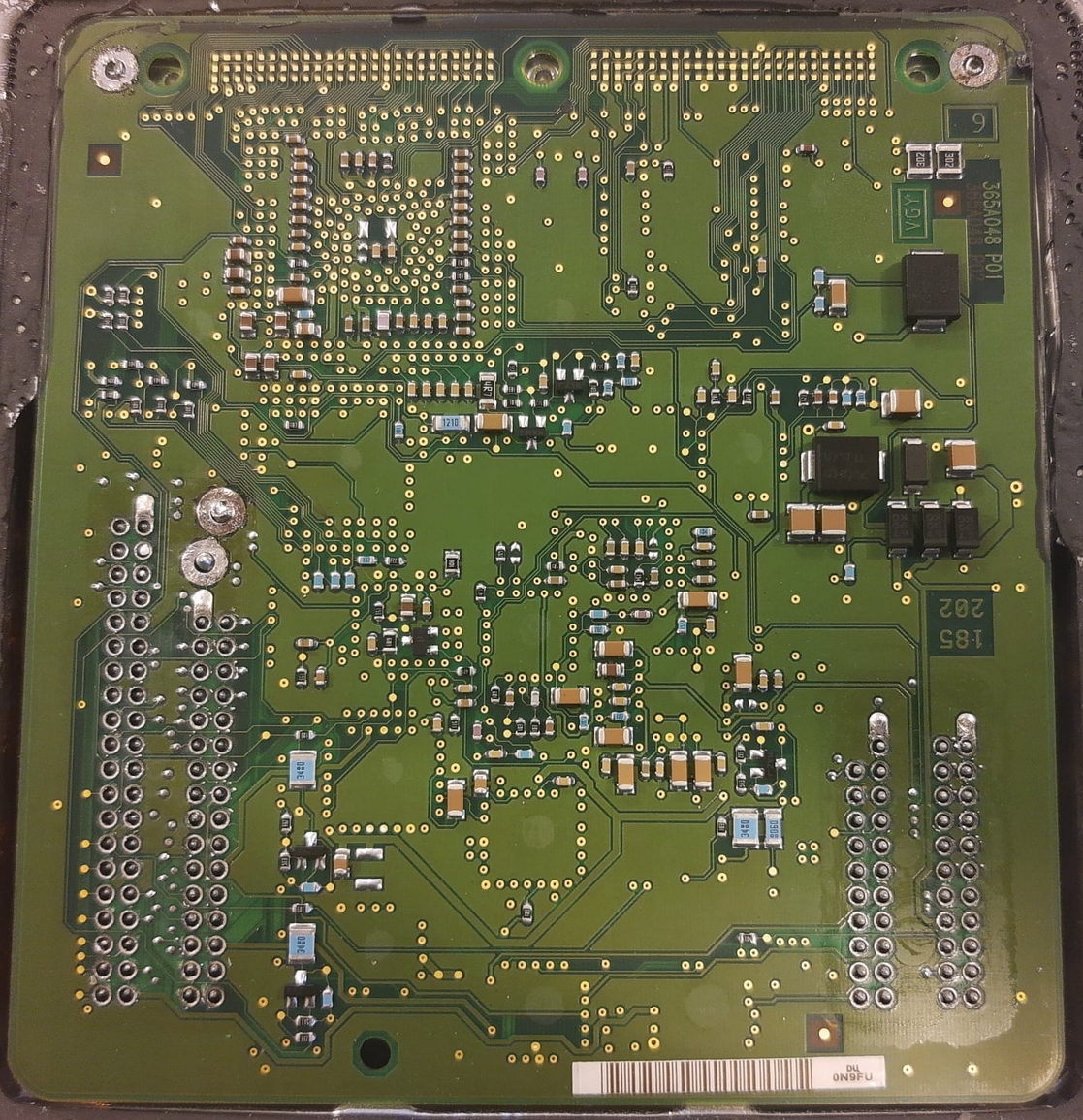 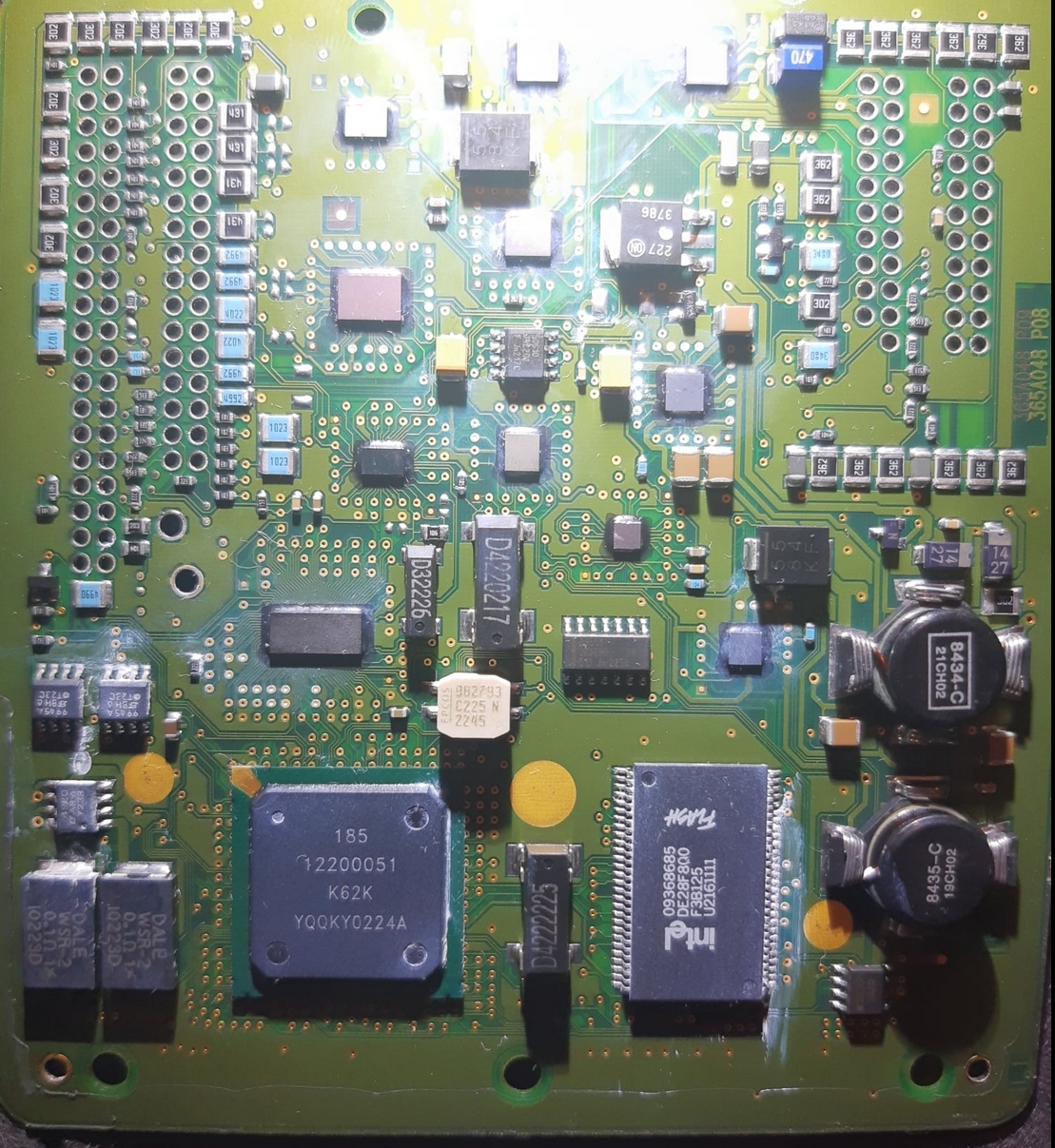 Yep, been working with a member from there on FB. I have a BDM coming, and I get to trace out points from the BGA on a spare PCM that's coming in the mail. Hopefully with his help I'll be able to communicate with the CPU/Flash chip and be able to pull the BIN and see how that all is structured and such.

I don't see an introduction section, but here's a quick blurt of my background

Schooling: PC Tech (HW & SW but way higher level than this stuff)
I've been soldering, installing mod chips, repairing traces, pcbs, game consoles, etc since highschool (15 years ago or so).
Done quite a bit on the software side, started with GW Basic (1987), Q Basic, VB6, VB.net, C#, C++ (tiny touch of C too), java, php, etc)
I've done a little work reverse engineering network packets, compiled java (byte code), and touched a little in asm.
I have a cheap Chinese solder rework station, works well enough for most things though. Have a Hakko china clone for a bench top solder sucker. I've touched a tiny bit into the Arduino stuff too since I have a wood stove and wanted to control the fan on it and the fan for under the house (keep pipes from freezing), so it monitors 3 temp sensors and 2 fans through two solid state relays.

I've generally have a can-do attitude, as long as I don't loose interest, I generally pull through on things pretty well. Always have 1000 projects going at once though, can't keep life simple xD.

Current plan is to read the bin, and check over it and see if I can make sense of the code/data. Maybe flash it unmodified onto another spare PCM I bought to validate the process works fine and the car fires up (has security). Then I can work on where to change the flag for security and such. Since I've worked with packets a bit, and bytecode, I've gotten somewhat used to converting hex values around and such so I think I'll have atleast a little success poking at the BIN.

Anyway, thanks for the warm welcome, hopefully the research I find can help make pcmhammer better, or even be able to help others down the road.
Top

There are several people on here that have been helping to develop PCMHammer.
Other than the primary developers, there are a few that had taken a crack at adding FWD V6 and I4 support, but seem to have gotten stuck with getting a kernal to load as they use a smaller amount of on-board ram.
I for one wish someone could get the P04 and P08 PCM support completed as I have a 2001 Grand AM 2.4l TwinCam and a 2005 Chevy Venture that I would love to be able to tweak!

Yea I was reading up on that a little, something about the update has to be applied and it starts executing right away, so a tiny os/kernel needs to be wrote to finish the update process. It's updated in blocks of my understanding, so the max block size is the max size for the os if I'm grasping it right.

Once the hardware part is figured out, I suspect the software side wouldn't be too hard to figure out, just time to figure stuff out.

Here's some fitment data for this PCM according to GM's site.

Looking at ebay, based on serv number, these calibrations come up:

Also 04-05 Chevy Malibu 2.2L vin 4 has same serv number, but GM didn't list them for some reason. Here's a few calibrations according to ebay listings (when they rarely say what it's from). Might have a slight reversion to the hardware? Some of the calibrations match across the 2 fitments, so that leads me to believe the hardware is atleast compatible.
12596601
12593507
12583742

According to the GM part number, the Malibu PCM has this interchange:

Users browsing this forum: No registered users and 1 guest