I did and he msgd me saying "your inflammatory comments were considered spam and hence removed". Not sure how asking if anyone has actually used the device and can confirm its results is inflammatory.

Asking a question about a product.. that Im sure everyones thinking.. and pretty much refusing to answer by instantly removing and banning the user... wow.
Hope he realises negative experiences like that will echo through the web. I mean.. put into google 'berry tuning tool' and tell me what the first link is..

MAGP wrote:Chasing him around the internet (and that is what now appears to be happening) won't really have all that much of an effect unless you post something on a site (like this) draw his attention to it inviting him to verify his claims. If he looks at what has been written and replies you have your answer, if he looks at it and doesn't like what has been said and then chooses to take legal action you may have a problem and also create a problem for this site and it's owner(s). Be very aware it is illegal to use a carriage (meaning communications) service to harass someone. If he thinks, and can substantiate, that he is being harassed you may have created a problem.

Not taking sides I just think people need to think about what they are doing and how it may affect others.

I get what your saying, but, himself and his company are not being harassed or slandered. But his products and services are being analysed and scrutinized, something that occurs to every single company, which he should respond to, by reassuring any new and current clients by answer those major questions

Simply ignoring them and banning every person that asks a true valid question is evidently going to cause conversations and discussions outside of his website/FB page as its the only place these questions can be asked!

If we were making false claims, such as "This berry product made my car catch fire", then yeah, he probably would have a go.
But questioning the technical aspects of how safe it is such as:
How does it handle conflicting data from hard connections and digital requests?
Does it poll the ECU for faults, if so, what does it do when it detects a fault?
Does it simulate sensors, if so, which ones? If sensors are simulated, how much true live data from the cars sensors are retained?

If I just ignored every single person that asked "Does SOE even work? If so, why?", then I would be out of business! Most people are skeptical about products found online that have minimal or no real reviews, the only exception is when they find experiences found on forums or through word of mouth.

According to chemistry, alcohol is a solution...
Top

Remember what happened to Powerchip? It has been six years and it is still the third google search result 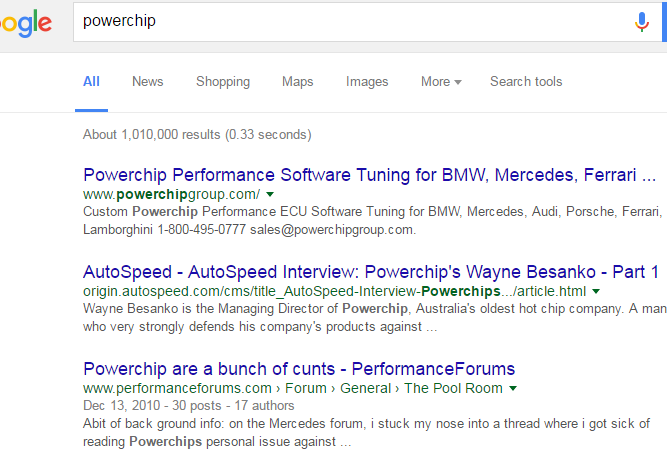 Absolutely not comparing his product in anyway to powerchip, but just showing an example of what bad publicity can do to you!
Last edited by rolls on Thu Nov 10, 2016 5:03 pm, edited 1 time in total.
Top

rolls wrote:Absolutely not comparing his product in anyway to powerchip, but just showing an example of what bad publicity can do to you!

Took me a bit to see that third one

rolls wrote:Absolutely not comparing his product in anyway to powerchip, but just showing an example of what bad publicity can do to you!

Took me a bit to see that third one

The replies in the thread are even worse. Someone delivered an entire broken gearbox to his doorstep as a present. He must have really rubbed people the wrong way to go that far!
Top

rolls wrote:The replies in the thread are even worse. Someone delivered an entire broken gearbox to his doorstep as a present. He must have really rubbed people the wrong way to go that far!

Im amazed they let that thread carry out for so many posts. Its absolutely hilarious!

haha I just noticed the 3rd one now. Burst out laughing at work.
I'm the director of VSH (Vlad's Spec Holden), because HSV were doing it ass about.
Top

summary here which is pretty loltastic

great read!
I'm the director of VSH (Vlad's Spec Holden), because HSV were doing it ass about.
Top

I am happy to have a factual conversation about the product here, but lets keep it on topic. Probably we can let this thread stall until more facts come to light. If the thread gets personal or goes downhill I will need to remove posts and lock it. But I think its better if it can just sit open without pages of comments that make it hard to read through.
Have you read the FAQ? For lots of information and links to significant threads see here: viewtopic.php?f=7&t=1396
Top
Post a reply
84 posts • Page 8 of 9 • 1 ... 5, 6, 7, 8, 9

Users browsing this forum: No registered users and 0 guests